October is the month for Sheffield’s Literary Festival – Off The Shelf, and my writing group will be launching its twenty sixth… 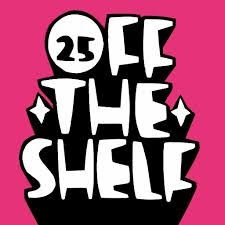 Our launch will be on Monday 10th October at The Lescar on Sharrowvale Road. Members of the group will read out some of their work and we will be joined by our special guest: Gavin Extence (The Universe versus Alex  Woods; The Mirror World of Melody Black and his new book: The Empathy Problem) It should be a good night. £3 entrance fee which includes a free Anthology. The evening starts at 7.30 and we aim to be away by 9.30. That doesn’t always happen though but The Lescar is a very nice pub so it’s not a terrible sacrifice to stay longer.

I have to produce something to read out at the event. This is always a problem as I write novels. As such, I really could do with more than the three or four minutes that are allocated. However, restriction feeds the creative process (try writing a story in fifty words – a great exercise), so I  will be needing something new. I will heed the recent advice of my friend Conor O’Callaghan and ‘keep it spooky’. October is definitely the month for getting spooky as the dark nights draw in and Halloween approaches…

That’s it, I need some light relief.

I was here only three weeks ago.

There, that’s much better. I can feel the sun on my face and the beer in my belly.

I’ll try not to digress again.

So, spooky. Where was I? Oh, yes! So, it needs to be short and, by their nature, spooky stories really need a bit of time to build. There’s a problem right there. But I have a solution. Or at least I think I do.

There was a short event in my past that was instantly spooky. I was walking up a lane in Derbyshire, away from a relatively well-off, large housing area. In the distance, I could see a family walking down towards me. Mum, dad and young son. As they approached I noticed that they were rather old-fashioned in the way they dressed. Sort of fifties-ish. The boy wore knee-length grey shorts, a knitted jumper and a cap. In addition, as we were about to meet, I realised that the child bore a striking resemblance to myself in the early sixties (when I would be five or six, the same age as the boy approaching). The gap slowly closed and the boy stared at my face as we passed. A little perplexing.

I continued up the lane, amusing myself with the idea that perhaps the boy was thinking, ‘He looks just like I will in twenty years time.’ After a minute or two I stopped and turned around. No idea why. At the bottom of the lane the family had also stopped and were trying to urge the boy on. He was standing stiff and resolute, facing up the hill, his stare was still locked onto me.

Obviously, it meant nothing. But it did give me a turn and I’ve never forgotten it. And the idea of Doppelgangers is a powerful one. So that’s where I’m going with my very short story. If it works, I’ll post a link to it on here in November.

And now…  a seasonal image more in keeping with Halloween and things that go bump in the night. Only it was taken exactly five hours after the picture above.